It’s been ages since I played Animal Crossing, and I am sick of waiting.  The latest news suggests I need to keep waiting for upwards of a year more, which I find quite unacceptable.

However, on reflection, I do wonder why I feel this way about a game that has made me waste many months (nay, years!) of my life in mindless servitude.

The latest Animal Crossing is apparently named “Jump Out” but no doubt the Australian release will get a stupid name like “Experience the Experience!”  And despite my reservations, like the pain of childbirth suppressed by the subconscious mind of a new mother, I find myself yearning for this game.

Surely it’s been long enough to release the Animal Crossing hounds once more, and I can delve head first into another year’s worth of daily checkins, DS clock windbacks, obsessive flower watering, bug catching, coelacanth wishing, and fossil digging.  I’m sure some of my gamer pals can relate to this love/hate relationship.

The new AC promises some new and exciting features, but I’ve heard that before (um… City Folk/Let’s Go to the City, anyone?  Yes, “Let’s Go to the City” is the stupid Australian name).  The Wii version was probably one of my biggest gaming disappointments, even though it came with the cool WiiSpeak peripheral (which I used about three times).  The main disappointment came from the city being essentially a couple of overpriced shops, when I fully expected a shopping mall, city apartment and hang out areas for WiFi friends.

So, forgive my cynicism for “Jump Out”.  So far, the best AC game was the GameCube version, which I played less obsessively but with more enjoyment.  Particular points of joy came from rowing over to my secret island to catch summer bugs all year round with Kap’n, and using the GBA e-Reader device to get extras from e-Reader cards (of which I had many, and made a decent amount of money on the side selling my spares on eBay.)

However, I am definitely interested in the proposed new gardening shop, the apparent swimming ability and the likelihood of being the mayor of the town.  Perhaps the animals will stop trash-talking me now!  I was also pleased (read, ecstatic) to see that there should be a return of the island feature I loved so much in the GBC version.  For more info on shops etc, take a look at this article.

The game is out in Japan in a few months, so I guess the truth will be out soon enough. 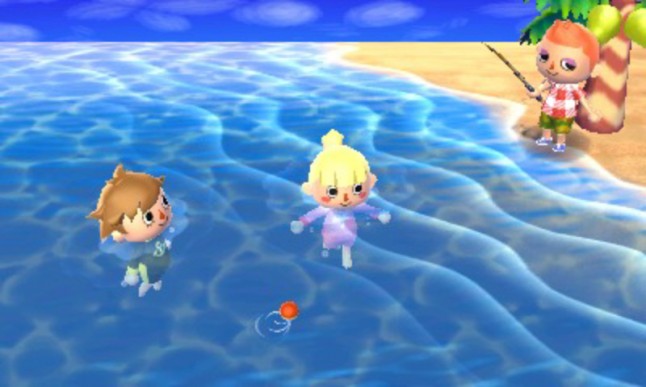 Swimming! Is it real, or another cruel Animal Crossing joke?